Readers opine about living Santa Clara values, and a note about those missing class notes.

WHERE ARE MY CLASS NOTES?

Many, many of you.

Have no fear! The class notes return in this issue. We don’t mind if you flip to the back to catch up with a friend.

As I was reading the wonderful articles, I came across the incident in Khaled Hosseini ’88’s experience in having his travel expenses met. It brought back to me an experience of walking across campus in 1958 with my head down and I heard a voice call out, “You look down.” It was Father General. I told him of my mother’s ill- ness and how I did not know if I could do my senior year. A week later a letter arrived for me telling me not to worry, all my expenses were going to be paid. What a lesson of Jesuit values that I carried with me all my life.

RETURN OF A CLASSIC

For more about the updated The Hut, check out the back of the magazine.

I noticed Santa Clara Magazine con- tinues to include articles about sustain- ability but is not using recycled paper.

The magazine articles ring hollow when they talk about what others are doing or what could be done else- where, but Santa Clara’s own primary communication tool is no longer lead- ing by its example in sustainability.

I hope you can raise this issue with the leaders of the magazine and com- munications team.

There is a lot that can be done to reduce the environmental impact of publishing the magazine, the least of which is using recycled paper and en- couraging recycling of the magazine.

The other magazines I get from

I’d like to see Santa Clara Maga- zine become an example of sustain- ability in its deeds.

This may be a case of us being too modest. Santa Clara Magazine is printed on 100 percent recycled news- paper, without a special gloss or coat- ing to make it easier to recycle again. Read guilt-free!

The story of Lizbeth Mateo J.D. ’16 is as inspiring as it is gut-wrenching. I am very familiar with Mateo’s story. I worked for Senate President pro Tem- pore Kevin de Léon during his time as leader of the Senate. When Sen. de Léon appointed Mateo to the advisory committee, I remember the angry, vi- cious, and repugnant phone calls our office received. Unfortunately, these types of hate calls were all too com- mon when you work for an elected official who passionately and unapol- ogetically supports undocumented Californians, particularly students.

As for Mateo, her courage and strength is awe-inspiring. To be at- tacked so publicly and personally on a daily basis is not easy to handle. For many people who experience this type of bullying and hate, it is understandable to give in to instinct, to disappear into the background to protect not only themselves, but their loved ones. But for Mateo, she chooses to stand up and be counted; to continue her journey as an undoc- umented woman. Her journey is one of survival, not only for her, but for all undocumented men and woman living, working, and contributing to our society. I applaud her and feel such pride to know that Santa Clara helped shaped her drive and desire. As a first-generation college gradu- ate working in public service, the values of compassion, service, and social justice I experienced at Santa Clara guide my work every day. Liz- beth Mateo represents the best of Santa Clara.

On page 14 of the Fall 2018 edition, Jason Dicochea ’20 should have been listed as a second-year infielder, not a first-year. 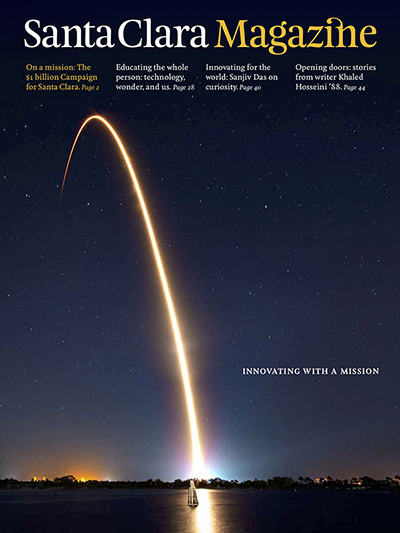 The cover of the Spring 2019 Santa Clara Magazine
Share