Bryan Stevenson has argued death penalty cases before the Supreme Court and helped exonerate men wrongly convicted of murder. In return, he’s received both death threats by telephone and a MacArthur Foundation “genius” grant for his work with the Equal Justice Initiative (EJI) in Montgomery, Ala. And this March he received the inaugural Katharine and George Alexander Law Prize, presented by the SCU School of Law, honoring a member of the legal community fighting to correct injustice and to promote human and civil rights.

At an award ceremony hosted in San Jose on March 8, Stevenson was honored for his courage, self-sacrifice, and tireless work on behalf of indigent defendants, death-row inmates, and juveniles who have been denied fair and just treatment in the legal system. He and colleagues at EJI have successfully helped overturn or reduce death sentences in more than 60 cases.

With degrees from Harvard Law School and the Kennedy School of Government, Stevenson found his calling as a lawyer while serving an internship with the organization now known as the Southern Center for Human Rights, in Atlanta. Explaining why he has taken on such an arduous and financially unrewarding career, Stevenson told the Christian magazine PRISM, “For me, faith had to be connected to works.” 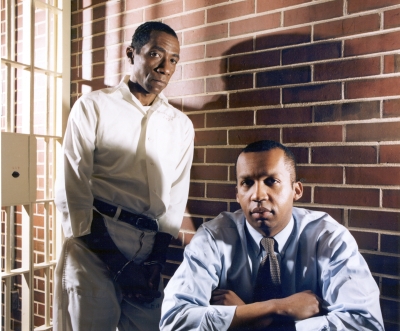 Living to tell the tale: Bryan Stevenson, right, with client Jesse Morrison, for whom he won a reduced sentence after 19 years on death row
Share